Tallulah Falls School (TFS) Athletics reports that the TFS girls basketball team took to the road on Saturday at Landmark Christian and walked off the court victorious.  The Lady Indians won for a second straight night with a 67-52 victory. The first quarter saw TFS take a 16-10 lead before Landmark pulled closer in the second. TFS held a tight 30-28 advantage into the break.  Katy Corbett knocked down a shot from deep in the third to help pad the lead, giving TFS some breathing room. The girls had a 47-41 lead into the final quarter and went on a tear with a 20-point fourth to finish off the win.  Denika Lightbourne had a game-high 22 points, Corbett had 14, and Veronaye Charlton 13. Abby Carlan finished with eight points, Iray Adeleke five points, and Barrett Whitener four in the win.  TFS is 13-6 overall and remains 5-1 in region play.  Photo by Crump Photo showing Abby Carlan. 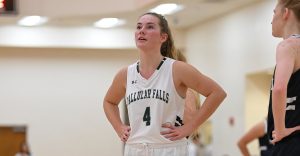