Tallulah Falls School (TFS) Athletics reports that a cheerleader’s responsibility is to radiate hope and excitement, no matter if the scoreboard says otherwise. TFS fortunately has done quite well in 2020-21 on the scoreboard, but the fans and players alike have been lifted by the spirit of the cheer teams nonetheless.  The middle school and varsity squads, coached by Amanda Rogers and Kim Popham, respectively, have navigated an interesting season with great attitude and work ethic.  “The eighth-grade students have taken on the role of teaching the younger cheerleaders and have been very kind to them,” says Rogers. “It has been a joy seeing the team work together so well. This is my third year teaching at the middle school so I have had the pleasure of teaching every cheerleader on the team. Building relationships with my former and current students has been so rewarding.”  Things were a little fluid at first, but the team got into a routine fairly quickly.  “We were not sure where the cheerleaders would be cheering from — the bleachers, on the floor or upstairs in the gym,” says Popham. “Luckily, our gym has the extra footage at the end so the girls were able to cheer eight on the floor spread out. Our other four cheerleaders cheered upstairs beside our student section. The girls rotate locations every quarter.”  The varsity program, despite not getting to perform in front of the audience they are used to, still went about business as usual.  “The girls learned new material pretty fast and helped each other get ready to perform,” adds Popham. “At the beginning of the season, the cheerleaders signed up to be captain and co-captain for a game. The responsibilities of the captain and co-captain was to come with a cheer list for each quarter, quarter cheers, and halftime routine.”  The mission for both programs were well laid out, and both were successful in achieving those goals.  “The main goal that I had for the team this year was to be a positive light on and off the court,” says Rogers of her squad. And, they have been so positive during this time of uncertainty.”  Popham’s squad had very similar aspirations.  “The main goal this season was to form a team that supports each other, cheers on our teams to victory and has fun,” says Popham.  For both middle school and varsity cheer, the mission was completed!  Photos by Crump Photo showing MS Cheer Team: Back row left to right: Brooklyn Reed, Mallory Higgins, Jace Ibemere Second row left to right: Lizzy Wanner, Zoie Kelly, Sarah Wilkinson Front row left to right: Makenzie Sanders and Haylen McGugan, coach Amanda Rogers in the middle.  Not pictured- Callee Elrod. 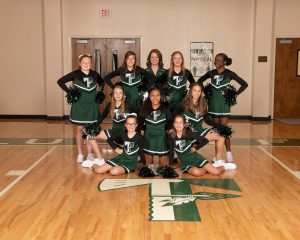 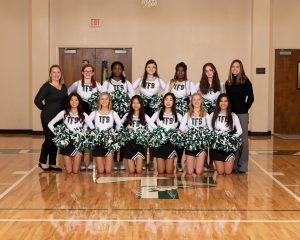