The Great Bambino, otherwise known as Babe Ruth, once said, “You just can’t beat the person who never gives up.” Widely regarded as one of the greatest baseball players of all time, The Babe overcame many trials in his days.  Tallulah Falls School (TFS) rising senior baseball standout Chathan Clouatre points to Ruth’s famous quote as a source of inspiration.  Clouatre, of Toccoa, declares he too cannot be beaten despite the tribulations he has weathered. He has proven a time-honored truth — that the only difference between quitters and winners is their desire to get up after they fall. The common thread is that everyone has times of failure, pain, suffering and loss.  The 2020 preseason All-State catcher, like his teammates and fellow athletes across the nation, saw his season cut short amid the global pandemic. His statistical output took a hit, but his spirit did not.  “We had a great team and had great potential to have a good record by the end of the season,” says Clouatre, who still managed to hit .286 with five RBI in just seven games.  “Our team at TFS didn’t get to finish the season the way we wanted to end through the pandemic. It was really disappointing, but I looked at it as a way to step up my game tremendously. With all the time at home and doing schoolwork on my own time, I saw an opportunity to work harder than ever to get back on the field and be way better than I was in the years before.”  Biding his time, he is honing his baseball fundamentals in hitting and catching until he can return to the diamond. This type of situation is nothing new for the ambitious student-athlete.  Clouatre has now had three seasons at the varsity level, all of which were cut short or threatened to be altered by no fault of his own. Prior to both his freshman and sophomore seasons in 2018 and 2019, a broken elbow during a sweltering summer twice endangered his chances to get on the field.  Through hard work, determination and a lot of hope, he was able to get back on the field to savor the 2018 and 2019 seasons.  “I was really worried about playing my freshman season, but it went very well,” Clouatre says. “Then I broke it in a different spot in the summer of sophomore year and I didn’t know if I was going to be able to play. There was nothing more I wanted to do besides play baseball, so I did the physical therapy to be able to play with no pain and no problems sophomore year. It was a great season.”  It was that season, during which he hit .439 and drove in 14 runs, which paved the way for him to be recognized as an All-State selection in the preseason of 2020. His selection, along with being named First Team All-Region in 2019 were among his favorite memories while at TFS.  Clouatre’s story goes deeper than being resilient in the game of baseball. His innate ability to create success for himself was handed down by his father, Serge.  “My father is my greatest influence because he would always take me to the batting cages or to the fields despite the workload he had that day or whether he wanted to go,” Clouatre says. “He pushed me to work harder even on the days I did not feel like doing anything; he just wanted the best for me because I wanted to be great at baseball and I wanted to get to the next level to keep playing the game I love. He would always say ‘there are three types of people: those who make things happen, those who watch things happen and those who wonder what happened,’ and I have always remembered that. That pushed me to be the person who makes things happen.”  Clouatre’s competitiveness elevates the play of his teammates around him, according to assistant coach Dustin Rogers.  “He exemplifies toughness,” Rogers says. “His tenacity and determination is a contagion that has spread to other players on the baseball team. They have no choice but to work harder when Chathan is around because to do anything less would let the team down. His throwback playing style only makes the team better.”  The daily grind to become a better player is what his teammates will remember when he eventually leaves TFS, and that legacy will trickle down to the future leaders of the team. One look at Clouatre during or after a game shows that he knows only one way – and that’s all in!  “After every game, Chathan’s uniform is caked with dirt,” Rogers adds. “His forearms may be bleeding from sliding head-first into second or he may have bruises from blocking a wild pitch. It is at these times that I will look at him and smile. This is a baseball player. This is what a catcher should look like. I’m comforted by the fact we still have young men like Chathan in the world. These types of players will only grow our sport and in the process, serve as a mentor and example for other athletes on how it is supposed to be done.”  Clouatre is a member of the Fellowship of Christian Athletes and has future aspirations to play college baseball and study physical therapy. His family chose TFS in order to give him a more challenging academic atmosphere to prepare for a college education. To that end, he carries a 4.0 weighted GPA.  Quite ready to put the coronavirus-plagued junior season in the rearview mirror, Clouatre is forthright about his final chapter at TFS.  “I am working harder for a great senior season next year,” Clouatre says. “There is still more to come in the future.” 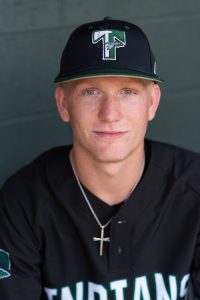 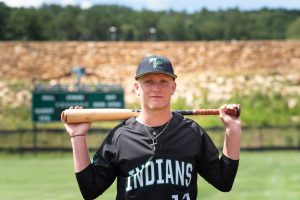