Brian Carter, Director of Sports Communication and Digital Media at Tallulah Falls School (TFS) reports “After having spent the last several years trusting a process, making sacrifices, and questioning what exactly it is that I want in life, the feeling is indescribable,” says Tallulah Falls School senior Maggie Jackson on committing Thursday to Wofford College.  “I’ve always been sure I wanted to continue to play golf in college, but I never dreamed that I could have the opportunity to play at the highest level,” adds Jackson.  The senior made her verbal commitment to the Wofford Terriers after what was a stellar summer season of tournament play. A top-ten ranked golfer in the state of Georgia, Jackson climbed her way up the rankings in the spring and summer of 2020. She finished 3rd (+4) at the GSGA Girls Championship in Savannah, 4th at Chateau Elan, 1st at Apple Mountain, 3rd at the Ga Club Junior Classic, and 7th in another tournament.  Juggling the recruiting process and playing at a high level, along with maintaining high academic marks during her career at TFS, has not always come easy.  “I’ve always heard stories about athletes who just ‘know’ it’s the right choice, and I can genuinely confirm this feeling of intense peace is humanly possible,” says Jackson.  “As a player who got into tournament golf pretty late in my career, it was pretty tricky to get the ball rolling in the recruiting process,” says Jackson. “The most challenging part for me was really to decide what I wanted out of a school and a program, as well as what I could do for them. Over these past few months especially, it hasn’t been easy with all the different restrictions on communication. At certain points over the last four years, I’ve had doubts about the outcome, constantly wondering if the work being put in was going to become tangible.”  Now that the commitment is made, Jackson can breathe a little easier.  “After my commitment, I just felt a wave of relief that I can only describe as the Holy Spirit,” she says. “It sounds cliche, but everything fell into place at the right time for my family and me. The best part is that everyone around me – my family, my friends, my team, and coach Campbell – all get to share this with me. Without them, I know I would’ve never gotten this opportunity, and for that, I am forever grateful.”  It was clear that Jackson has the ability to play at the next level, as she was the Area 2 individual low medalist in 2018 as a freshman and third in 2019 as a sophomore. She finished sixth at state in the sophomore season as well. Her junior season obviously was cut short due to the coronavirus, but she made up for it with her summer junior tour. The question wasn’t would she play at the next level, but where.  “I can remember vividly playing at state my freshman year, battling through an illness, and trying to make the most out of playing,” recalls Jackson. “That weekend, coach [Angie] Ridgeway watched me play, quite terribly in fact, and has stayed in contact ever since. That experience told me everything I needed to know about the Wofford program, and from then on I knew I’d be lucky to play golf there. I knew after the first day I stepped on campus that Wofford would be the school I held on a pedestal, never really sure if I could make it but still hoping with my whole heart.”  Like many athletes in all sports, there is something about making this type of decision before starting their senior season.  “Aside from the fact that it is so relieving to know where you’re going, trying to commit and sign during the high school season would’ve just been too overwhelming,” says Jackson. “I’m so grateful I could do it before the spring semester so that now I can really focus on my game, school, and just enjoying my senior year.”  Now that she has made the decision, there’s no way she’s budging from it.  “I’ve always heard stories about athletes who just ‘know’ it’s the right choice, and I can genuinely confirm this feeling of intense peace is humanly possible,” states Jackson. 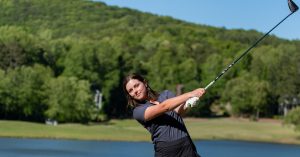