Tallulah Falls School (TFS) Athletics reports the TFS Indians overcame many deficits to claim a 61-59 thriller and advance to the Region 8-A Private Championship game. The Indians took down host Athens Academy in Saturday night’s semifinal round, though it didn’t come easy.  TFS won its fourth game in a row in the process. It was a low-scoring affair from the jump, as Athens Academy held a minuscule margin of 24-20 going into the halftime break. Both teams increased the offense in the third quarter, as the Spartans outscored TFS 17-16 in the quarter, adding a little insurance to the tune of a 41-36 lead going into the final quarter.  Tallulah Falls trailed 57-52 with under two minutes to go before a clutch Sammy Davis bucket pulled TFS to within 57-54, prompting Athens Academy to burn a timeout.  A steal in the full-court press moments later turned into a Gabe Keene layup to make it a 57-56 ball game. The Spartans hit a pair of free throws to make it 59-56 with about 45 seconds to go. Simeon Respress drilled a 3-pointer from the top of the arc with 26 seconds left to tie the game. Athens Academy had the ball from there but turned it over on a bad pass with about 7 seconds left. The inbound pass from TFS got the ball up the floor, where Respress hit the game-winner at the buzzer to give TFS the monumental victory. Respress led with 20 points. The Indians move on to the region title game on Wednesday at Athens Academy against George Walton. TFS is 17-4 on the season.  Photo by Crump Photo showing Simeon Respress. 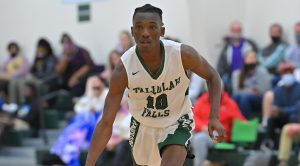