Tallulah Falls School (TFS) Athletics reports the TFS Lady Indians are peaking at perhaps the perfect time, as the girls took a 46-19 win over George Walton in the Region 8-A Private semifinals Friday night at Athens Academy.  The win, which was the fifth in a row for the Lady Indians, propelled the team into the region title game to be played on Tuesday, February 16.  The Lady Indians led wire to wire and held a 12-4 lead after the first while the defense held GW off the board in the second while taking a 29-4 lead into the half.  Katy Corbett notched 10 points in the first half alone, including eight in the second quarter. TFS pulled ahead 42-8 by the end of the third and went on to win 46-19.  Corbett led with 13 points, while Denika Lightbourne had 10. Veronaye Charlton finished with seven, while Iray Adeleke and Macy Murdock had six each, and Abby Carlan four in the win.  TFS is now 16-6 on the season and play in the region championship game on Tuesday.  Photo by Crump Photo showing Veronaye Charlton. 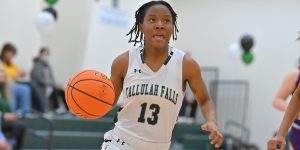