Tallulah Falls School (TFS) Athletics reports the Indians honored four seniors on Friday night when playing host to Athens Christian in a pivotal region matchup, coming off victorious in a 47-21 win. The win moves the Indians to a perfect 10-0 in region play, giving them the regular season region championship, and the first seed in the upcoming region tournament.  TFS and Athens Christian were deadlocked at zero for the first four minutes of the game until Devonte Allen knocked home a deep 3-pointer. TFS went on a 9-2 run before forcing AC to burn a timeout. Overall, it was a 14-2 run that spanned the quarter and gave TFS a commanding lead. Allen had five points in the first, while Gabe Keene had a couple of big-time blocks and dialed from long distance once.  Things got wild in the second, as Anfernee Hanna lit up the Student Activity Center with a thunderous dunk, and Sammy Davis on an athletic move for a basket did the same. A double-technical by AC led to Davis hitting three of four at the line to extend the lead to 21-6 midway through the second quarter, which came to a close with TFS up 24-9.  The third saw TFS outpace Athens Christian 14-4, as Julian Gober had five points in the quarter. The Indians held a sizable lead of 38-13 heading into the final stanza, and cruised to the finish line with a 47-21 win in hand.  Davis led the way with 12 points, while Hanna closed with nine, Allen seven, Keene six, Gober five, three each for Charlie Cody and David Rodriguez Moreno, and two for Simeon Respress. Kale Corbett, Davis, Gober, Respress and Rodriguez Moreno were all honored for senior night prior to the game.  The Indians are now 16-4 overall and 10-0 in 8-A Private, and are now riding a three-game winning streak.  Photo by Crump Photo showing Anfernee Hanna. 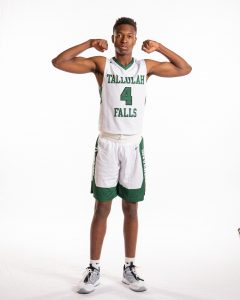