Tallulah Falls School (TFS) wraps up its spotlight on its spring athletes, who due to the global pandemic, saw their respective seasons end abruptly. For the week of April 27-May 1, we recognize four seniors. 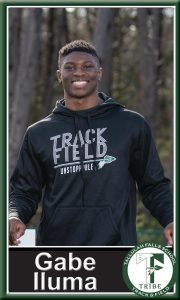 After helping his team finish seventh – the highest place ever for TFS boys – at the state swim championships in early February, senior Gabe Iluma of Nigeria instantly jumped all in to help the team with communication, leadership, performance role modeling, and a clear vision of the Tribe state of mind theme. He finished the shortened season with the No. 2 ranked pole vault (12’ 0) in Class A – Private. Gabe was on track to vault very high this year; he had just begun using a new transition pole to enhance his mechanical strengths. He has even kept in regular communication with the six-time national champion and 2017 world pole vault champion, Sam Kendricks.  Though we will never know what could have been, Gabe is undeterred while heading to Stanford University to explore the numerous avenues toward his passion to change the world with practical solutions to tough problems.– Coach Scott Neal 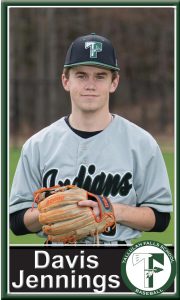 Senior Davis Jennings of Clarkesville is a four-year starter for the Indian baseball program.  Davis has either been at short or second or on the mound every defensive inning of his high school baseball career. As for the offensive innings he has been our leadoff hitter for most of them which means he has been charged with the task of getting on base any way that he can. The Indian baseball program has improved tremendously over the four years that Davis has been a part of the program. As a starting shortstop and leadoff hitter for most of those years, he has certainly done his part. We are proud he will be continuing his baseball career at Brevard College.– Coach Mark Wilcox 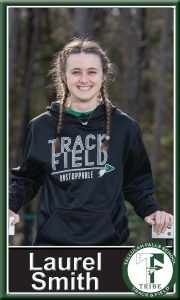 Senior Laurel Smith of Clayton is that team member everyone remembers because she makes them feel necessary, not just welcome. Whether running cross country, the 800m or her favorite – the 4×4 relay – in which her passion for team togetherness shines, Laurel extracts from her down-to-earth, mountain roots to emulate poise, purpose, and persistence. An avid outdoor enthusiast, she is comfortable fishing by herself or in the throngs of others, celebrating what matters most to them. Laurel ran her fastest 4×4 relay split at the state championship last season to help the team cut off five seconds while placing sixth to earn the third-best mark in TFS history.  Whether being a team leader for a variety of team projects and bonding opportunities or the balanced outlook she brings to the squad, Laurel Smith will be missed as she goes on to impact others throughout her life.– Coach Scott Neal 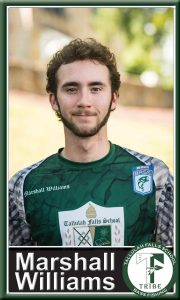 Senior Marshall Williams of Toccoa was a founding member of the TFS bass fishing team, the area’s first-ever sanctioned high school bass fishing team.  A competitive angler since age 10, Marshall decided early he was going to earn a scholarship to fish in college.  On the journey toward reaching his goals, Marshall has displayed ever-improving skills and abilities. While competing regularly against approximately 200 teams in this rapidly growing sport, he has finished ranked in the top 10 and top 20 three times. He was on his way with teammate Thomas Harris to what appeared to be a top 15 finish in Georgia before the season was canceled. He has now qualified and competed in three state championships and is awaiting a decision on whether the fourth state championship will take place or not due to the pandemic.  On May 7, 2019, Marshall signed with the NCAA Emmanuel College Lions. As an Emmanuel College team member, he will be competing in the FLW Yeti College Series and the B.A.S.S. Carhartt Series. As this young man continues his fishing passion in college, we all are excited to see where it takes him in life.– Coach Russell Williams